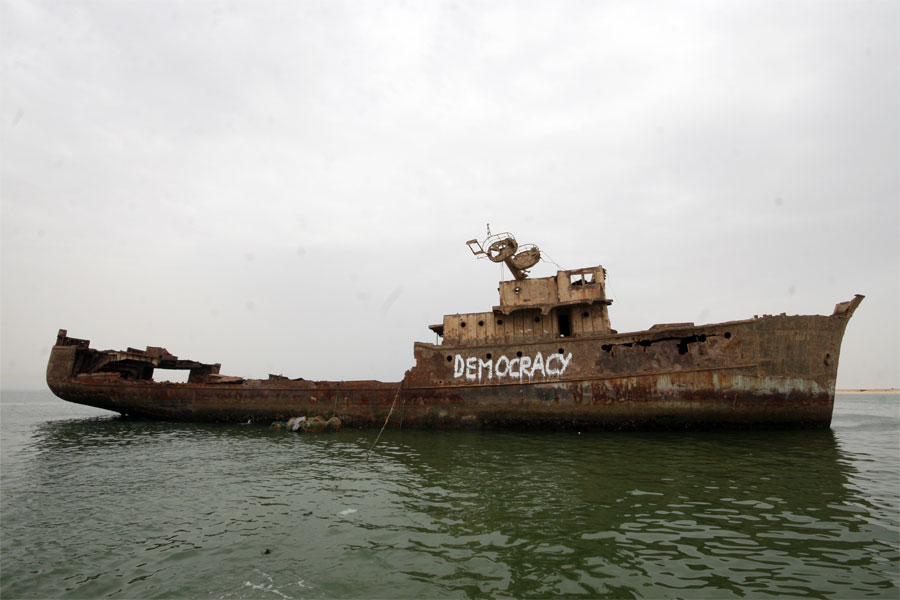 This is seemingly not the view of the Washington Post, which has recently added the slogan ‘Democracy Dies in Darkness’ to its masthead. The Trump administration, we’re to believe, poses an existential threat to American democracy. It must be resisted, it seems, in “light” (it’s not yet entirely clear what WaPo’s position is on teaming up with the ‘deep state’ to bring down the Trump presidency).

Nowhere is the democratic delusion more embedded in the culture than America, which is odd considering how anti-democratic some of the instincts of those who authored the constitution were. At the Secret Debates of the Federal Convention of 1787, for example, James Madison argued:

Landholders ought to have a share in the government, to support these invaluable interests, and to balance and check the other. They ought to be so constituted as to protect the minority of the opulent against the majority.

This best-worst form of government, as Winston Churchill famously characterised it, has also long been a cover for committing some of the gravest crimes abroad. The Anglo Saxon’s propensity to take to democracy was, according to the social Darwinists, a mark of the race’s superiority and this rationale provided the moral justification for their imperial ambitions – an enterprise disingenuously characterised as a ‘civilising’ mission.

With such race theories now taboo in polite society, democracy’s stakes rose under American imperium. President Bush Jr. promised that democracy, spread at the barrel of a gun, would succeed in Iraq. Even liberal ‘democratic organs’ like the New York Times backed this paradoxical plan to send in the marines to give a people who hadn’t been consulted what they wanted. This delusion – that US imperialism is democratic and virtuous – was easier to sell because most Americans were blind to the fact that their country had long been a polyarchic basket-case.

The idea that representative democracy is democratic and that voting is a case of exercising one’s democratic right is part of this grand illusion. We’re told that elections provide the people with a chance to participate in democracy, but it’s worth reflecting on what real participatory democracy would look like. It would mean playing a creative role in how positions are formulated, but in our liberal democracies we don’t even have a say on whether policies should be ratified or not.

There has always been a pervading sense within capitalist democracies that too much popular participation is undesirable. Candidates have to mask such sentiments so this charade can continue, but occasionally they let their guard down and reveal what they really think of the masses. Hilary Clinton’s ‘basket of deplorables’ comment was a faux pas not because people were genuinely insulted or offended, but because it exposed the seething contempt so many of ‘the establishment’ have for the people they claim to represent.

In the recent US elections, Clinton was cast as the embodiment of ‘the swamp’ that Trump promised to drain. It wasn’t just her name, nor was it a simple case of misogyny, despite what many on the Left would like to believe; Clinton became the vector through which many channeled their anger, frustration and sense of helplessness after decades of neoliberalism. Many Trump voters may not have understood the formal economic arguments that underpinned the free market orthodoxy, but they knew instinctively that what they’d been feed by politicians for decades didn’t marry up with their own experiences. They worked hard, tried to save, refused to take ‘handouts’ from the state, but still could never get ahead. They were brought up to believe that a focused individualism was what it took to succeed in America – that people would be rewarded for their hard work.

There’s no room for structural inequalities or systemic discrimination in this ideal, yet this is what many are experiencing. They yearn for an America that never really existed; what they really want is an America in which inequality and discrimination is something others experience. Donald Trump offered a path back to this Eden – he promised to Make America Great Again. But his fight for the White House wouldn’t be easy because, as he repeatedly said, he was fighting against a multitude of individuals and institutions with vested interests in him losing. Upon reflection, it’s perhaps unsurprising that those who felt they were being conspired against by these same vested interests were drawn to his bluster. It was only fittingly that his final obstacle was the personification of ‘the establishment’ he’d spent the whole campaign trashing. And Clinton, for her part, played the role of power-hungry, valueless statesman perfectly.

Trump called his supporters the ‘forgotten men and women’ and it was a moniker that rang with more than a hint of truth. For decades, American democracy has relied on these people’s obedience and apathy. They were disenfranchised: why vote when no one speaks to your concerns or when you think every politician is corrupt as the next? These ‘forgotten men and women’ participated in society only as consumers; that’s to say, they didn’t participate in any meaningful way at all.

Trump’s win is by no means a win for genuine democracy; rather, it exposes just how emaciated and nominal it’s always been. The illusion that a capitalist economy can exist alongside democracy may still endure, but people are becoming aware of the injustice at the heart of American society: that, while the gap between the richest and themselves continues to grow, they’re also becoming increasingly marginalised.

The great irony of the Washington Post’s renewed vigour in its quest to save American democracy is that it’s long been one of neoliberalism chief ‘propaganda organs’. It’s too late for them to lament the death of democracy, it’s already dead – they killed it long ago.

(This was originally published in Daily Review on 25th February, 2017.)